Go Go Graduates! (がんばれ！受験大戦争, Do Your Best! examination Great War) is an event that first appeared in Nyanko Daisensou from February 19th, 2018 to March 5th, 2018 and in other versions from January 28th, 2019 to February 11th, 2019. This event introduces two unique enemies: Bang-Bang and Pigge Victorious.

The next generation of Battle Cats faces their greatest challenge yet - passing their final exams and graduating from the Nyan Academy. Can they survive FINALS WEEK and earn full membership in the Cat Army?
On between January 28th (11am) and February 11th, 2019 (11am)!

● Finals Week Limited Stages!
After unending months of serious study, this year's Nyan Academy graduates are nearing the finish line! Send out your troops to fight off the invaders from the rival Doge Institute and help the Cat students keep focus!
Check out these stages by heading to Event Stages/Stories of Legend and choosing the Go Go Graduates map.
Take on new and strange event-only enemies like the beskirted one-dog army Bang-Bang, or the egotistical Pigge Victorious!
Clear any stage in this event map throughout this campaign to pick up Lucky Tickets, good for awesome rewards at the special Lucky Capsules!
Later stages will grant you better chances at getting multiple Lucky Tickets!
※Update to the most recent version of the Battle Cats to access this event!

● Lucky Capsules!
Get special Cats, items, and XP packs from these limited edition capsules!
Check out the Lucky Capsules section on the Cat Base menu to use your collected Lucky Tickets from the Finals Week event!
Plus, get a bonus Lucky Ticket along with any Rare Capsule draw!
※ Any single Rare Capsule draw will grant you one extra Lucky Ticket, while an 11-Capsule Draw will reward you with a bonus 11 Lucky Tickets!
※ Once the Lucky Capsule event is over, you will be unable to use your remaining Lucky Tickets or exchange them for items, etc. Be aware and use them soon after getting them!
※ Update to the most recent version of the Battle Cats to access this feature!

● Special Missions in the Catnip Challenges!
Collect limited-time mission rewards by completing Silver Week stages!
Once you've met the requirements, head to the Catnip Challenges and accept your prizes!
※These Special missions can only be completed until February 11th at 11:00am, so don't forget to claim your rewards before then! 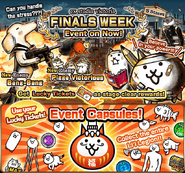 Retrieved from "https://battle-cats.fandom.com/wiki/Go_Go_Graduates!_(Celebration_Event)?oldid=304361"
Community content is available under CC-BY-SA unless otherwise noted.