Not to be confused with Gold Brick Cat.

Gold Cat is a Super Rare Cat that can be unlocked by playing the Rare Cat Capsule when "Limited Edition" is part of the current pool. Gold Cat can be exchanged for 999,999 XP instead of 478,000 XP. True Form added in Version 11.4 increases health and grants Wave Immunity.

Gold Cat's Cat Combo with the basic Cat, Rich and Poor, can be useful in some stages, mostly timed ones.

Though this cat is pretty useless late-game, it can be quite useful in the early game as a third meatshield.

Despite everything, this unit can be particularly useful as a meatshield if, and only if, used well, since it is exactly like the basic Cat in speed: you can just meatshield this way: summon a Cat, when the recharge time of the cat is 50% send a Gold Cat, the basic Cat will be ready when the Gold Cat is at 50%, so you can send him and wait for the next Gold Cat, etc. This is an efficient way of meatshielding, since it is unlikely that enemies with fast attack speed like Teacher Bun Buns will kill two of them at the same time, while other meatshields often stack up with Macho Cats and can die while overlapped, leaving a gap in the line that may cause trouble in the long run.

Important: The fact that Cat and Gold Cat have the same speed means that if they are spammed normally (in very quick succession), both are always guaranteed to die from the same attack, if area, making the duo act as if they were only one meatshield and completely nullifying the advantage of having two. This is most notable when using a CPU; it is therefore recommended to stop the CPU to de-sync the two cats whenever possible.

You may think that exchanging this Cat for 999,999 XP, three times Sweet XP (Insane) with maximum Cat Study and Treasures is a good idea. However, it is normally better to use it, despite the potential XP. This is because it is easier to farm XP Guerrilla Stages over time while also getting an increase in User Rank from using this Cat. Alternatively, one can exchange Gold Cat dupes for 15 NP, as NP can be harder to come by than XP.

Glittering Macho Cat gains a 50% boost to HP and complete immunity to waves. The HP boost is negligible because Glittering Macho Cat has low stats and mostly relies on being spammed. The Wave Immunity, however, is an amazing ability due to the lack of Wave-Immune meatshields, as most cheap anti-wave units are simply too expensive and it helps to strengthen your frontline in wave-heavy stages. This ability especially works in stages where your wave blockers like Octopus Cat just couldn't take the heat, such as Heavenly Tower's Floor 30 or Infernal Tower's Floor 30.

*First stats are 1st form's initial, second and third stats include 300% Empire of Cats Treasures; recharge time may vary.
*Time between attacks is the time from the attack's execution to the start of the next attack (includes backswing).
*For units with multi-hit attacks, attack animation is the part of the animation leading up to the first hit.
*Fruit Treasures not included.
*See this section to calculate Gold Cat's stats. 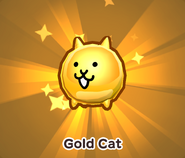