The real deal in the event. It shares many similarities with the common R.Ost: fast attack rate, high DPS, decent speed... However, it has almost no health and lacks the ability to do Critical Hits. Use Critical Hitters to take it down easier. Despite being the strongest golden enemy in the event, it has a lower money drop than both Goldoge and Sir Hippoe.

Golden R.Ost can be treated as a Metal Doge with longer range. Use fast-attacking and/or ranged cats such as Crazed Cow Cat, Gross Cat or Space Cat to take it out quickly. If you need to use Ubers, then Hayabusa, Marauder Cat, Graveflower Verbena or Sakura Sonic are some of your best choices. 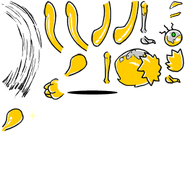