During this event, from the Stories of Legend menu, tap the "Start" button to see a new Event Chapter: 「黄金週間ゴールデンウィーク」 (Ōgonshūkan gōruden uīku, Golden Week Golden Week). This event stage introduces 3 new Golden-themed enemies. Upon completing these levels, the player will have a chance to receive many Lucky Tickets to spin the Lucky Cat Capsule.

*If the event does not appear, the player needs to update the game to the latest version (6.0)

The Lucky Cat Capsule is held during this event. It contains many limited characters and items such battle items and XP. Lucky Tickets can be obtained by clearing the Golden Week stages mentioned above and by playing the Rare Cat Capsule (1 spin = 1 lucky ticket).

During this event, initial discount is held again: the first time doing a 1-time spin the Rare Cat Capsule will cost only 30 Cat Food, and 750 Cat Food for a 11-time spin.

The platinum ticket is for sale again during this event. Using a Platinum Ticket will guarantee an Uber Rare drop in the Rare Cat Capsule. This gacha contains all Uber Rare Cats from the regular pools, Seasonal Ubers, Collaboration Ubers and GirlsMons Ubers are excluded.

*The player needs to update the game to version 6.0 in order for this Gacha to appear, if it doesn't appear after the update, try rebooting the application.

Cat Eye Cave and XP Harvest Festival maps are held during this event with higher chance to get Cat Eyes and XP.

In the Normal Cat Capsule, the player can switch to Catamin Capsule and Cateye Capsule, to get Cateyes and Catamins upon spinning it.

Treasure Festivals with longer period will appear in the Empire of Cats on even days; appears in Into the Future on odd days.

During this event, the player will receive 20 Cat Food as login bonus everyday. 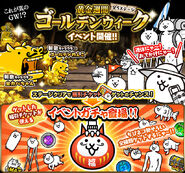 Official Golden Week illustration
Add a photo to this gallery
Retrieved from "https://battle-cats.fandom.com/wiki/Golden_Week_Event?oldid=494581"
Community content is available under CC-BY-SA unless otherwise noted.