Graveflower Verbena is an Uber Rare Cat that was added to the Girls & Monsters: Angels of Terror set in version 6.4 on August 30th, 2017. She can be unlocked via the Rare Cat Capsule when said event is held. True Form added in Version 9.6 increased health and critical chance.

Evolves into Verbena the Bride at level 10.

Evolves into Opulent Verbena at level 30 using Catfruit and XP.

She can be quite useful when dealing with Metal enemies. Even if she does low damage, she can kill many Metal enemies with one Critical Hit (however, her first attack isn't strong enough to OHKO Super Metal Hippoe). However, it isn't recommended to use Verbena against anything that isn't Metal.

Despite having short range, Verbena actually outranges most of the Metal enemies, which gives her more usage against them and makes her extremely useful in stages like Utopia is Over There, where most enemies are Metal enemies.

However, since her attacks increase in strength, this can be rather troubling, since her first hit can't kill Super Metal Hippoe in one Crit, and a Critical Hit from her third hit is the only one that can OHKO a 100% Sir Metal Seal.

She can also form a synergy with Hayabusa. While Hayabusa hits Metal enemies that are far away, Verbena can hit those that reach his blind spot.

*First stats are 1st form's initial, second and third stats include 300% Empire of Cats Treasures; recharge time may vary.
*Time between attacks is the time from the attack's execution to the start of the next attack (includes backswing).
*For units with multi-hit attacks, attack animation is the part of the animation leading up to the first hit.
*Fruit Treasures not included.
*See this section to calculate Graveflower Verbena's stats. 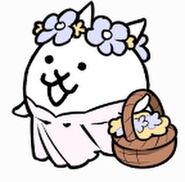 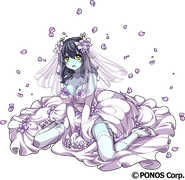