Gudetama (ぐでたま) is one of Sanrio's character, that has had a collaboration with the Japanese, Korean and Taiwanese Versions of The Battle Cats. The Event Period was July 13th, 2017 - July 27th, 2017.

During the event's period, a Gudetama exclusive gacha appears in the Rare Cat Capsule menu. This Gacha introduces 3 new Units:

All players will receive the Special Cat Gudetama Cat after Facebook, LINE and Twitter campaigns get 5000 shares/retweets. Period: July 11th~18th, 2017.

LINE campaign will also present collab gifts by lottery out of the participants:

If the broadcast reach 30,000 viewers, a Rare Ticket will be sent to everyone. By answering questions during the broadcast, collab goods can be received: 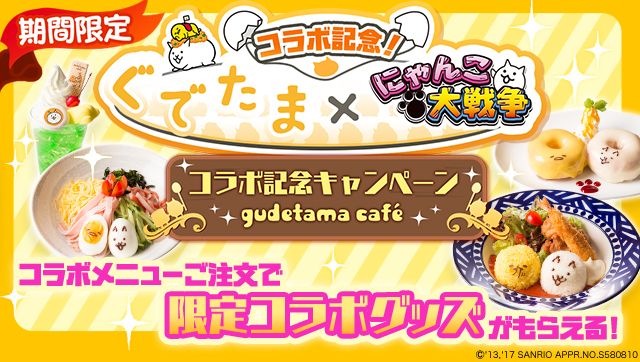 During the event's period, 2 Gudetama Stages are available in the Stories of Legend menu. 「I Am Gudegude」 available since the start of the collab, 3 days later (July 16th), a second stage 「I Can Just Eat It Anyway」 is up. They are both Timed Stages, which means when the player clears a stage, depending on the score, various rewards can be received.

Login everyday to get gifts including XP, Battle Items and more.

From July 7th to July 18th, 2017, the player can receive the Special Cat Gudetama Cat when they login.

I Can Just Eat It Anyway

Official Gudetama Animation
Add a photo to this gallery

Retrieved from "https://battle-cats.fandom.com/wiki/Gudetama_Collaboration_Event?oldid=399469"
Community content is available under CC-BY-SA unless otherwise noted.