This article is about the Cat Unit. For the enemy unit, see Gummy Cat (Enemy).

Gummy Cat is a Special Cat that can be unlocked by purchasing a special sale which contains Gummy Cat and 30 Cat Food. It was added to promote Japanese Battle Cats gummies.

Evolves into Lucky Cat at level 10.

This unit, although having high health compared to most other meatshields, is largely obsolete most of the times in comparison to meatshields such as Wall Cat or Crazed Tank Cat, due to the simple reason of this unit having an abysmally large knockback count of 1,000. This means that it won't stay in the frontline for long at all before getting knockbacked. This ruins the whole point of Gummy Cat being a meatshield in the first place. Likewise, it has quite a long recharge time compared to most other traditional meatshields, making this unit mostly relegated to User Rank or early-game encounters. With all this being said, one of its only redeeming factors is its health, but even that is outclassed by a high enough leveled Crazed Tank Cat or Wall Cat.

*First stats are 1st form's initial, second and third stats include 300% Empire of Cats Treasures; recharge time may vary.
*Attack frequency is the time between an attack is delivered and the next.
*For units with multi-hit attacks, attack animation is the part of the animation leading up to the first hit.
*Fruit Treasures not included.
*See this section to calculate Gummy Cat's stats. 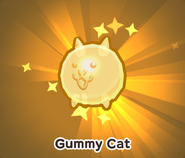