H. Nah (ハイ・エナジー, Hai Enajī, High Energy) is a Traitless enemy that appears in Legend Stages and The Aku Realms.

At first sight he may seem like a Mooth with buffed stats. Similar range to Mooth too, at 344. While decently fast, his pushing power is tremendously reduced when you are meatshielding against him. He also has high health and knockback count. Along with a 100% chance to knockback all Cat Units, you can pretty much guaranteed that almost any unit below 350 range won't stand a chance against any quantity of H. Nahs.

Because of his 100% chance to knockback, 350+ range units are basically required unless it is a rusher. Pile up ranged cats such as Macho Leg Cat or King Dragon Cat while spamming meatshields (Mohawk Cat, Crazed Macho Cat, Eraser Cat, etc.). Paris Cat and Drama Cats are especially good here, since they have Area Attack. To make the knockbacks less constant, it's recommended to use the default Cat Cannon to sync them up in a pinch.

Out of all the "big units" you could throw out against a pack of H. Nahs, one of the best choices is someone any player can recruit two chapters away from H. Nah's debut stage: Ururun Wolf. With a knockback effect of her own, she has a chance to sync up the H. Nahs every time she attacks, and she attacks quite often. Knockback-immune cats are also heavy units that you can use against H. Nah, such as God-Emperor Sodom or Divine Kai, if they can also outrange H. Nah, then they will be much more helpful. Units with long backswing and no time between attacks have a rebound attack which will also work in favor with H. Nah's knockback, but if they don't then that is fine to. Some examples are Maglev Cat and Sanada Yukimura, although this is less viable later on the game where buffs can escalate his damage to the point where he kills most rusher units outright or inflict enough damage to stagger the unit. 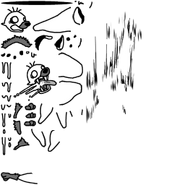