HaterBaa 2.0 resembles a normal Baa Baa but with the wool texture being flat and covered in a giant oak leaf, aside from having metal legs, head, horns and tail. Its horns appear to have an armoured design, being darker than the rest. When HaterBaa 2.0 is attacking, its outer mochi shell jiggles forward, revealing a metal interior.

It has high attack power and DPS, however, due to its Single Target it acts a lot like Capy/Lucky Dags with a faster attack rate, albeit weaker.

HaterBaa 2.0 has very low health despite its Metal ability, so fast attackers and cheap units such as meatshields are recommended. Cow Cat and Ninja Cat work good against this enemy. Critters such as Hurricat or Catasaurus can also dispatch of HaterBaa 2.0 rather quickly. 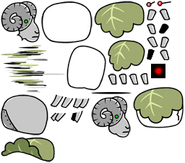