Hearscht is an Uber Rare Cat that can be obtained by playing the Rare Cat Capsule during the Merc Storia Collaboration Gacha. True Form greatly increases critical chance, speed and health and minimally increases attack power.

Evolves into Hearscht CC at level 10.

Evolves into Revolutionary Hearscht CC at level 30 by using Catfruit.

First, it's important to notice that this unit is not viable at all against metal enemies unless in True Form. Even then, she only crits every 15 seconds on average. Her strength comes from her health, which makes her usable against Koronium and CyberFace, although still unreliable. There are also instances in which she can make a bigger difference than Soba Cat, such as when Super Metal Hippoes push a lot, but these instances are rare.

Hearscht is not usable at all against non-metals due to her horrible stats and single target attacks.

Overall, this unit is only recommended to fill in a gap in an anti-metal army if no better options are available.

*First stats are 1st form's initial, second and third stats include 300% Empire of Cats Treasures; recharge time may vary.
*Time between attacks is the time from the attack's execution to the start of the next attack (includes backswing).
*For units with multi-hit attacks, attack animation is the part of the animation leading up to the first hit.
*Fruit Treasures not included.
*See this section to calculate Hearscht's stats. 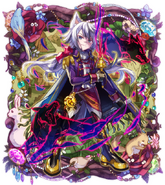