Heavenly Herald Papuu (聖者ポプウ Seija Popuu, Saint Popuu) is an Angel variant of Daboo of the Dead that appears in the Advent Stage Papuu's Paradise.

Heavenly Herald Papuu is overall weaker than Daboo of the Dead, but has a significantly longer Omni Strike range plus a shorter battlefield in her debut stage, allowing her to hit the Cat Base from afar, plus a faster attack rate. Her attack power is quite low for an advent boss, but she has a new trick up her sleeve: the Toxic ability. It deals percentage-based damage, so even the most resilient cats will die in 3 hits (her ability takes 40% of a unit's total HP). She has the same immunities as her predecessor along with immunity to waves, and her base damage is tripled at 30% HP.

While having more than 30% health, Papuu eliminates cats with...

While having less than 30% health, Papuu eliminates cats with... 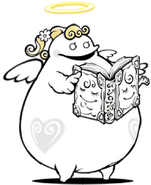