Evolves into Can Can Cat at level 30 using Catfruit.

This unit has moderate slow time and chance (4 ~ 4.8 seconds + 40%), which can be very effective against enemies such as Bore and One Horn due to their short range. However, if not protected correctly, its attack will be interrupted.

Despite its slow ability, Hip Hop Cat should not be used as a crowd controller, as its high DPS and low cost make him a far better general attacker. If you use it against any short ranged enemy such as Nimoy Bore, they can easily stack up and take them down very quickly. Treat the slow as a nice bonus that may help against reds, but don't rely on it.

Due to its many knockbacks and low attack rate, it is possible for player to save up money using this unit at the start of a battle. Don't forget to send meatshields to protect it!

Think of Can Can as a more cost efficient version of Balrog Cat: they have a very high health and damage for their price. It's great as a hard-hitter all throughout the game, and shines even more later on. Get in one good hit, and you'll ruin the day of just about any enemy there is. Can Can Cat is extremely helpful in dealing with enemies who have slow and long-ranged attacks, such as THE SLOTH, Sunfish Jones and Le'noir, provided that there are not peons or dangerous support in the way. Can Can Cat is particularly useful in Cats of the Cosmos as it is immune to Warp. As such, a horde of Can Can Cats can smash Starred Aliens without fear of interruption.

Through talents, Can Can Cat can unlock the Extra Money ability! This expands its general usage even more as it can take out enemies and give you exorbitant amounts of cash. The Health and Attack Up are not too important, because it's more efficient to use catseyes and (+) levels. The Speed Up talent also allows the unit to "dance" into the blindspots of enemies, or tackle further-ranged enemies, putting its great stats into good use. Lastly, the Target Alien talent is not very useful, due to Can Can's long time between attacks and the existence of Psychocat and Seafarer, plus the aforementioned lack of importance of the slow ability.

*First stats are 1st form's initial, second and third stats include 300% Empire of Cats Treasures; recharge time may vary.
*Time between attacks is the time from the attack's execution to the start of the next attack (includes backswing).
*For units with multi-hit attacks, attack animation is the part of the animation leading up to the first hit.
*Fruit Treasures not included.
*See this section to calculate Hip Hop Cat's stats.

Can Can Cat's attack animation 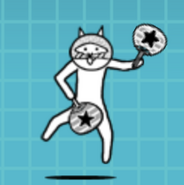 Retrieved from "https://battle-cats.fandom.com/wiki/Hip_Hop_Cat_(Super_Rare_Cat)?oldid=519962"
Community content is available under CC-BY-SA unless otherwise noted.