Honda Tadakatsu was an Uber Rare Cat that was exclusive to the VIP Sengoku Wargods Vajiras Gacha, only available in the PC version. His debut date is unknown. Require Moba Coins or VIP Tickets to spin the Gacha. He was one of the VIP Uber Rares that was effective against both Cats and Enemies.

Evolves into Wargod Tadakatsu at level 10.

Tadakatsu specializes in base destruction, as if the enemy base gets in his range, it will start taking massive damage from a distance. His high health and inability to be knocked back until he dies also ensure that as much damage as possible be delivered on the base.

He can also be a fairly decent generalist Long Distance unit, much like many others, but he's not without issues.

His main gripes are the fact that he has an awful recharge, a high cost and horrible survivability, due to mediocre health, a very wide blindspot one knockback. He also has immunity to knockback, so if an enemy starts attacking him from within his blindspot, he will die unless some other Cat Units can save him... or unless he destroys the enemy base first.

*First stats are 1st form's initial, second and third stats include 300% Empire of Cats Treasures; recharge time may vary.
*Time between attacks is the time from the attack's execution to the start of the next attack (includes backswing).
*For units with multi-hit attacks, attack animation is the part of the animation leading up to the first hit.
*Fruit Treasures not included.
*See this section to calculate Honda Tadakatsu's stats.

In the Gacha poster

In the Gacha menu

In another promotional poster 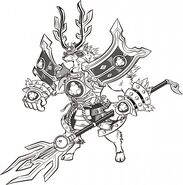