Hoop Cat is a Rare Cat that can be unlocked when beating Attack on Titanium. True Form greatly increases freeze chance and duration, range, and health.

Evolves into Showoff Cat at level 10.

Evolves into Hoopmaster Cat when obtained from Revenge of Titanium (guaranteed to drop) and is level 20 or above.

It's generally advised to stack many Hoop Cats, since a large enough stack can render even the most powerful metal enemies useless. Research Catcombos work well, but may take up needed space, so stacking before a metal boss comes out is encouraged. Meatshielding should suffice in many situations.

Hoopmaster finally gets more abilities that fix his previous forms' weak points. The increased freeze chance and uptime is very useful when fighting metal enemies and relies on less RNG. However the best point of this unit's true form is the increased range. Hoopmaster can now outrange deadly metal enemies such as Super Metal Hippoe or Sir Metal Seal.

Remember that the single target attack does not change through true form so take caution.

*First stats are 1st form's initial, second and third stats include 300% Empire of Cats Treasures; recharge time may vary.
*Time between attacks is the time from the attack's execution to the start of the next attack (includes backswing).
*For units with multi-hit attacks, attack animation is the part of the animation leading up to the first hit.
*Fruit Treasures not included.
*See this section to calculate Hoop Cat's stats. 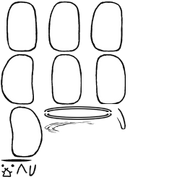 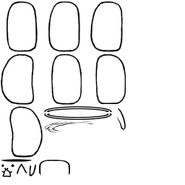