View source
watch 02:30
Dead Cells Final DLC - The Loop
Do you like this video?
Play Sound

Into the Future is the second saga in The Battle Cats and is unlocked after clearing Chapter 1 of Empire of Cats. This mode contains 3 additional chapters, with 48 levels in each once again. This mode also introduces Timed Score Rewards, in which you gain bonus rewards depending on how quickly you complete a stage.

The main gimmick of this saga is the debut of Alien Enemies; they are extremely strong, don't give much cash, and have a 700% strength magnification by default, which can only be reduced by the anti-Alien Crystals you may obtain as Treasure.

The deployment cost for Cat Units is that of Legend Stages and EoC Chapter 2, which means you pay 1.5x for the base price of a unit.

In Into the Future, the Cats have time traveled from Empire of Cats to 29XX, when hostile Aliens have invaded every country on Earth. After putting the Alien invasion to a halt, it is revealed that a rocket is being built by the Cats, alluding to Cats of the Cosmos. Unlike Empire of Cats, the English and Japanese versions of Into the Future take place across the same locations.

On that day, Aliens came to this planet.

But, hey, what's this? Was it just bad timing?

The people of Earth brushed the visitors off like weirdos.

Their revenge on the humans who ignored them took many forms:

Sure, some guys weren't too happy. But lets not worry about that.

Oh yeah, by the way: I've been an alien from space all along.

The changes we made to earth creatures are the symbol of our rule. Lately, you see guys on the street with THAT growing from their head.

Earth has no words to explain what THAT is.

You'd definitely die of embarrassment if you tried to describe THAT.

A real gentleman would never dare mention THAT in public.

That's how awfully shocking THAT is.

Anyhow, I've got 8 of THAT growing on my head.

We had just about invaded every country in the world, but then... some really troublesome guys appeared without warning.

We heard they'd conquered the past... and now they came to invade our future.

There's just one thing I want to say to the Cat Army:

Well, it is true that we sunk Japan...

Well, lets not waste any more time. On to the greatest showdown:

And so... the Alien empire fell before the power of the Cat Army.

A new world has emerged: of the Cats, by the Cats, for the Cats! This life will surely become even more punishing and cruel! Aaagh!

Well, that's what I thought.

But... In the end, nothing really changed.

Well, if I have to say something. Cats star in a lot more TV dramas these days.

Now we have lots of cute "big sister" characters on TV. Aliens became less trendy so we don't get parts anymore.

Hey, do you remember THAT? Well, pushing and pulling on THAT is the new comedy boom.

I just got back from drinking with the Cats...

They were a little tipsy, but they seemed very interested in our planet.

I was cornered for over an hour... They kept asking things like: "Is there Cat Food over there?"

They were so persistent I finally just said, "Yeah, sure!"

Suddenly their eyes were gleaming with childlike joy.

I hear they're building a rocket now.

Anyhow... Congratulations to The Battle Cats!

Onward into an endless universe!!!

Into the Future introduces a new enemy trait: Alien. The trait's main gimmick is that every alien enemy has a default strength magnification of 700% (additive to other buffs). However, there are new crystal treasures to combat this; each superior reduces the magnification by 100% (subtractive).

Into the Future Stages and Treasures

See Treasure for more information on each Treasure.

The Into the Future background for the Main Menu

Full map of Into the Future

The Cat Base Menu in Chapter 1

The Cat Base Menu in Chapter 2

The Cat Base Menu in Chapter 3

A teaser for Into the Future 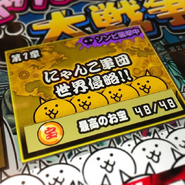 A teaser for Into the Future's Zombie Outbreaks
Community content is available under CC-BY-SA unless otherwise noted.
Advertisement