Iz the Dancer of Grief is an Uber Rare Cat that can be obtained by playing the Rare Cat Capsule during the EPICFEST event. She was added in Version 11.5.

Evolves into Iz the Lady of Mourning at level 10.

This unit has a bit of everything, which makes her quite easy to use. While she may struggle against ranged, powerful enemies like Professor A. or Le'noir, or Metal Enemies, she can work well against pretty much everything else. The low cost and good stats make her a decent pick even against common traited enemies, resulting in one of the safest picks when challenging stages without knowing their content. The biggest thing to look out for is her range. Iz the Lady of Mourning has a tendency to get way closer to the enemy frontline than you may want her to, only to start her somewhat slow-ish attack animation, which can easily be interrupted. The fast speed and immunity to everything do not help. For this reason, she is best paired with de-buffers, fast meatshields and meatshields or tanks who can make their way through enemy surges, slows, etc. alongside Iz.

While she may be brought into a fight for one or more abilities in particular, there are some that don't exactly stand up on their own. Namely, while her Zombie Killer is helpful, her stats are not great for killing zombies, meaning that she shouldn't be picked above specialized anti-Zombie units. A similar thing is true for Colossi, as she will get destroyed by the likes of Super Hyppoh regardless.

Notable enemies she counters well are ones who rely almost exclusively on their offensive or defensive abilities, such as Big Peng-Z, Miz Devil, Ultra BaaBaa etc.

*First stats are 1st form's initial, second and third stats include 300% Empire of Cats Treasures; recharge time may vary.
*Attack frequency is the time between an attack is delivered and the next.
*For units with multi-hit attacks, attack animation is the part of the animation leading up to the first hit.
*Fruit Treasures not included.
*See this section to calculate Iz the Dancer of Grief's stats.

Iz the Dancer of Grief's spritesheet 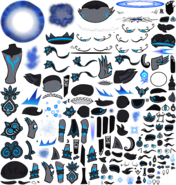 Iz the Lady of Mourning's spritesheet