Johnnyleon (ジョン・レオン Jon Reon, John Leon) is a Red/Alien/Zombie enemy that only appears in Uncanny Legends.

Johnnyleon is a Long Distance enemy with a massive amount of health, the same as Relic Bun-Bun. If allowed to move, he is somewhat quick on his feet, and his two knockbacks may make it difficult to regain distance from him. His Long Distance attacks are frequent, but they are fairly weak and they do not come with any status effects, so being within Johnnyleon's attack zone is not that dangerous unless a unit stays inside of his blind spot for a prolonged amount of time due to complications related to standing range. Despite having the Zombie trait, he cannot revive upon death, and does not burrow either.

Johnnyleon is frequently found in conjunction with several backliners that cover his blindspot, such as Angelic Sleipnir and H. Nah who join him in Rainbow Bridge Toll, and Maawth and Alpacky who join him in Flask Hill. This complicates things, as the backliners will try to defeat whatever is in Johnnyleon's blind spot, and if they succeed, then Johnnyleon will not hesitate to move up again due to his unusually low standing range for a Long Distance unit.

The typical strategy against Johnnyleon is not to defeat him as soon as possible, but rather to fit lots of Long Distance and Wave Attackers into his blind spot and let them target him in order to snipe the backline that is supporting him. This works because Johnnyleon's immense health pool and few knockbacks means that the backline will go down quicker than he does and that the attackers will only have to worry about entering the backliner's range about once or so when Johnnyleon is knocked back for the first time. Units applicable for this strategy include Medalist Cat, Housewife Cat and Manic Macho Legs.

If Johnnyleon is alone, or in a situation where it is actually a better idea to prioritize taking him out first, he is best dealt with by piling cheap short-range attackers onto him who have Massive Damage or Strong Against abilities for any of his traits, as his weak Long Distance attacks are not of much concern. Units applicable for this strategy include Elemental Duelist Cat and Chill Cat.

A cat resembling Johnnyleon appears as a common enemy in Battle Cats Quest. It has the ability to turn invisible every now and then. 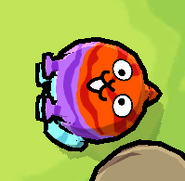