Juvens is an Uber Rare Cat that can be obtained by playing the Rare Cat Capsule during the Merc Storia Collaboration Event. True Form added in Version 8.10 increases his health, switches attack to a Multi-Hit and grants a 20% chance to Dodge attacks from Angel enemies.

Evolves into Juvens CC at level 10.

Juvens is a very specialist unit. He is very good against Angel enemies, acting as a Ramen Cat that is more expensive and has a longer recharge time. However, he only has quite mediocre tanking abilities against non-Angel enemies. For general usage, he can be used as Greater Balrog Cat with higher health, higher cooldown and much lower DPS. Due to his Single Target, he cannot be used in stages that spam lots of enemies, and is more inclined to stages with little to no peons.

He can perform well in stages like No Plan A or Parade of the Dead.

With higher health and the Dodge Attack ability, Juvens gets an even stronger defense against Angel enemies. Multi-Hit somewhat relieves the fact that he has Single Target, and he has a fast attack rate so it will rarely hinder his performance. Angel enemies often rely on multiple quick attacks to deal their damage, like Angelic Sleipnir or Angelic Gory. This makes Juvens' dodge more useful.

*First stats are 1st form's initial, second and third stats include 300% Empire of Cats Treasures; recharge time may vary.
*Time between attacks is the time from the attack's execution to the start of the next attack (includes backswing).
*For units with multi-hit attacks, attack animation is the part of the animation leading up to the first hit.
*Fruit Treasures not included.
*See this section to calculate Juvens's stats. 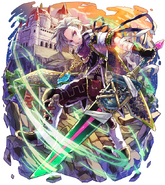