Kaguya of the Coast is an Uber Rare Cat that can be unlocked by playing the Rare Cat Capsule during the Gals of Summer event. It was added in Version 10.7 and is the summer variant of Princess Kaguya.

Evolves into The Southern Sun at level 10.

As a variant of an Ultra Soul, Kaguya of the Coast has significantly different stats between Normal (spammable) and Evolved Form (high performance), both of which can be used effectively depending on the situation.

Kaguya of the Coast bears only negligible differences compare to Princess Kaguya, so the way to use her stays the same.

Her strength comes from being extremely cost efficient and hitting very often, to the point that she can't even be rushed down by a Doge Dark, who would instead be juggled back continuously. All this impressive offensive potential comes at the hefty price of a mediocre range for Ultra Souls standard as well as health so low that it's basically a one-hit kill against most enemies with adequate magnification for her level.

Black and Alien enemies have a large selection of frontline units that Kaguya of the Coast may outrange, but Alien units tend to have barriers, few knockbacks, high health or high damage most of the time, making her rarely effective. She can, however, be used effectively against some enemies such as Nimoy Bore or Star Pengs, even in stages that cap the cost as 600, where she and her normal version are the only Ubers available. Blacks are where she shines, as a couple hits can usually knock them back and keep them there, slowed, for a bit, thus relieving the frontline from the high pushing power that characterizes Black enemies. She isn't as effective as the likes of Bombercat or Surfer Cat in stalling tougher enemies, but that is also a thing she can be used for quite effectively.

Although with short uptime, the Southern Sun has a guaranteed slow and good stats, which make it less effective against hordes, but great against strong, longer ranged enemies against whom the Normal Form falls short, such as I.M. Phace.

As a frail backliner with long attack windup, she is best suited for non-aggressive approaches with many meatshields or tanks, so it may stay safe in the background and land hits often.

For generalist usage, the Southern Sun is fairly standard, with everything being useable and quite good, but nothing being excellent. She should never be picked above a specialized generalist, but her lack of relevant downsides still makes her more useable than most for this.

*First stats are 1st form's initial, second and third stats include 300% Empire of Cats Treasures; recharge time may vary.
*Attack frequency is the time between an attack is delivered and the next.
*For units with multi-hit attacks, attack animation is the part of the animation leading up to the first hit.
*Fruit Treasures not included.
*See this section to calculate Kaguya of the Coast's stats.

Kaguya of the Coast's spritesheet 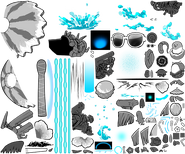