Kai is an Uber Rare Cat that can be unlocked by playing the Rare Cat Capsule during the Cyber Academy Galaxy Gals event or the Air Busters event. True Form greatly increases her attack power, health, movement speed, and grants Knockback immunity.

Evolves into Divine Kai at level 30 using Catfruit and XP.

Kai is a very tough and durable tank unit, especially against Floating enemies. Despite her short range, Kai is extremely useful to stop slow and strong Floating enemies such as the Crazed Bird Cat for a while and inflict good damage. Her DPS may seem incredible, but due to her short range and long attack animation, she'll often only get a couple hits in before she gets knocked back. At the very least, though, she has the stats to tank and OHKO a group of Brollows.

Despite being resistant to Floating, it is not recommended to use her against any Cyclone other than The Perfect Cyclone due to her short range, as the Cyclones' DPS will shred her as quickly as any other unit.

Her Combo, Pork on Rice, is a really nice Defense Combo. Riceball Cat and Kai both have good uses on certain stages, and it has good synergy with other Combos like Cool Japan or Cheating Heart?.

Divine Kai doubles her health, along with gaining more damage and higher speed. This makes her especially good against Long Distance enemies, even more so than before. Her newfound knockback immunity now allows her to be a powerful asset in stages such as Floor 39 of the Heavenly Tower, where Mr. Mole would easily knock her back.

Her base stats improve more than significantly, meaning that what she did well previously in her Normal and Evoled, she now does best in. This True Form is a massive improvement over what she was before, giving you an even better reason to bring her into battle. Furthermore, her generalist usage is now decent, and along with being able to tank fairly well against non-Floating enemies, makes her damage output worth it for her cost. However, in late Stories of Legend and Uncanny Legends, this means nearly nothing against most peons, as most have enough sheer DPS to end her quickly.

Presumably due to her already tremendous pool of health, Kai was not given a Defense Buff Talent. Unfortunately, most of what she got instead isn't too great; Resist Slow and Weaken are about as useful as they always are, and while Resist Wave can make her a decent anti-Wave unit, better options for that already exist plentifully. Attack Buff is a little bit better, as her attack power is already quite high, but the NP investment isn't likely to be worth it when Catseyes are still an option.

She does, however, have one outstanding Talent in Shield Piercing. At max level, her attacks are guaranteed to break Shields, some of which can be incredibly tough to take down otherwise. Her general tankiness also makes her easily capable of walking directly into the enemies' attacks to get rid of their Shields. This combined with the lack of alternate options makes her one of the best Shield Piercers in the game, proving her worth incredibly well in stages like the Mount Aku Invasion and Temptation's Symphony.

*First stats are 1st form's initial, second and third stats include 300% Empire of Cats Treasures; recharge time may vary.
*Time between attacks is the time from the attack's execution to the start of the next attack (includes backswing).
*For units with multi-hit attacks, attack animation is the part of the animation leading up to the first hit.
*Fruit Treasures not included.
*See this section to calculate Kai's stats.

Kai's outfit is obtainable in Princess Punt Sweets during the collab. 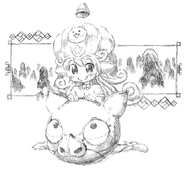