Kalisa is an Uber Rare Cat that can be unlocked by playing the Rare Cat Capsule during the Cyber Academy Galaxy Gals event. She was added on December 19th, 2014, update 3.2. True Form added in update 6.5 increases her attack power and range.

Evolves into Divine Kalisa at level 30 using Catfruit and XP.

Kalisa is an excellent anti-Angel attacker who acts as a very aggressive frontline heavy hitter and suicide bomber. Alone, Kalisa can take down weaker Angel enemies like Angelic Gory and Heavenly Hippoe in merely one or two hits. If timed perfectly with the Thunderbolt Cannon, Kalisa can rush in and deal a single attack's worth of damage to any Angel within her range.

Kalisa's weakness is her short range, which leaves her vulnerable to Chickful A, Winged Pigge and especially Angel Sleipnir; either one constantly outrange and knock Kalisa back, leaving her helpless to attack. Take care not to deploy Kalisa in the wrong time unless these enemies were frozen, weakened, or slowed, elsewise Kalisa will be unable to hit them, effectively wasting your money.

As with all fast cats, take care when using the Cat Cannon or other sources of knockback since it can cause her to clip through enemies and get hurt.

Divine Kalisa gains a higher attack range and more attack power. Her extra range is quite nice and does not hurt, but does not improve enough to change much about her usage. The bigger and more important change is her attack power which increases her devastation further against angels.

Slow is a nice Talent that will cause Angels hit by her to not rush back in immediately, helping her stay out of harm's way, but it can also lead to enemies getting stuck into the range of a backliner - a small drawback, but it may cause Kalisa to perform worse on rare occasions. Even then, Sanzo Cat's talents already cover the slow perfectly for the nasty pushers, and Kalisa's high damage tends to kill angels very quickly, rendering crowd-control abilities redundant.

Defense Buff and Attack Buff are basic, but welcome improvements for a unit such as Kalisa, although it is better to invest in levels first. Avoid giving Kalisa Curse Immunity as the amount of mixed angel-relic stages are rare and will therefore never become relevant, especially considering the high cost.

Increasing Kalisa's speed makes her even more reckless, but also helps her when it comes to timing or avoiding Long Distance attacks, so think about it well before investing in Move Speed Up.

*First stats are 1st form's initial, second and third stats include 300% Empire of Cats Treasures; recharge time may vary.
*Time between attacks is the time from the attack's execution to the start of the next attack (includes backswing).
*For units with multi-hit attacks, attack animation is the part of the animation leading up to the first hit.
*Fruit Treasures not included.
*See this section to calculate Kalisa's stats. 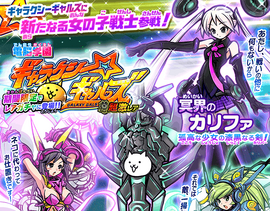 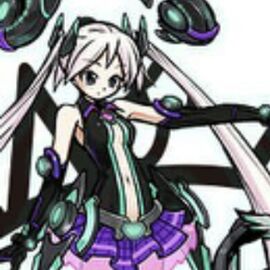