Like the other Ultra Souls, Kasa Jizo has significantly different stats between Normal (spammable) and Evolved Form (high performance), both of which can be used effectively depending on the situation.

Kasa Jizo has a very short cooldown, so a stack of them will annihilate most Black and Angel enemies in their path. Once leveled up, Kasa Jizo is virtually unstoppable on Black-dominant stages like Gestalt, Decay, Soap Scum and the XP Stages (though Bombercat is nearly essential for Merciless XP!), as well as Angel-heavy stages like Broken Mask and No Plan A. Even against other enemies he still has fine stackable DPS, about 50% more than that of a Cyborg Cat of equal level.

Thanks to the combination of range and short cooldown, Kasa Jizo is also usable as a pseudo-meatshields in certain stages where the use of short ranged cats is ill-advised, notably against wave enemies or certain Long Distance ones.

Jizo's Moving Castle can be very useful on stages with powerful, decently-ranged bosses with supporting Black or Angel enemies, such as the Crazed Tank and Manic Eraser stages. In some cases, the boss might also be a Black or Angel enemy like Angry Fighting or Spa of Ascension. His range of 450 is good enough to outrange most enemies, further improved by the massive damage ability, which is very helpful as some mid-late game threats are Black or Angel. A level 50 Moving Castle has a whopping 150k HP and a grand 129,600 damage. That's up to 518,400 against Black and Angels, enough to kill almost anything in only a few hits! Even better, the generalist usage for the moving castle is quite good.

With all this being said, the moving castle has two flaws that drag it down: its knockbacks and attack rate. Both are lacking and, should an enemy creep in during its attack cooldown, the moving castle may be as good as dead. Luckily, the castle’s problems are lessened in its True Form.

Jizo's Moving Castle should still be used in place of the normal form in some cases, as some enemies cannot defeated by it. Winged Pigge, St. Dober and Othom are the most prominent enemies countered by this improvement, while less notable enemies this also helps against include Master A., Project A, THE SLOTH and Le’noir.

Kasa Jizo's main use lies in his Normal Form for stackability, a very important point for those who have proceeded far into the game. This, unfortunately, means that there is very little point in acquiring his True Form; but if you do, it is not a bad idea, as Jizo's Mega-Castle has its attack cooldown shortened, gains more health and more range, at the cost of a multi-hit attack. Multi-hit is a small price to pay, depending on the level you wish to use the mega-castle against, but more commonly, it may either cause Jizo to miss his attack or, in some cases, annihilate enemies, especially ones that move fast. It is important to note that his multi-hit works like a staircase: the first hit is the most weak, followed by the second, which is more powerful, followed by the last, which is the most powerful. This sometimes knocks enemies back before they die, causing Jizo to miss his last, most powerful shot.

*First stats are 1st form's initial, second and third stats include 300% Empire of Cats Treasures; recharge time may vary.
*Time between attacks is the time from the attack's execution to the start of the next attack (includes backswing).
*For units with multi-hit attacks, attack animation is the part of the animation leading up to the first hit.
*Fruit Treasures not included.
*See this section to calculate Kasa Jizo's stats.

Kasa Jizo appears as a 3-star monster in the fifth collaboration event story. Though his Evolved Form also takes part in the story, this form is not unlockable. 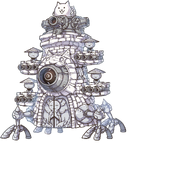 From Merc Storia collab
Add a photo to this gallery

Retrieved from "https://battle-cats.fandom.com/wiki/Kasa_Jizo_(Uber_Rare_Cat)?oldid=523738"
Community content is available under CC-BY-SA unless otherwise noted.