Kid Tappa (マナブくん Manabu-kun) is a Starred Alien variant of Dolphina that appears in Cats of the Cosmos, Uncanny Legends, and The Aku Realms.

Kid Tappa is a defense-oriented enemy, similar to Zamboney Cat. He is speedy, tough, has a 15,000 HP Barrier, one knockback and a great deal of health (especially if the player doesn't have all Anti-Starred Alien Treasures) but low damage and range.

Barrier Breakers such as Li'l Macho Legs or Kendo Cat can obliterate his barrier, although they aren't necessary to bring if you have any cat with attack power over 15,000. All that's required after is damage, but there is no danger in keeping Kid Tappa alive, so anyone can take it from there. Instead, his high health and tendency not to move can be exploited by cats who need a stepping stone, such as Mina, Polevaulter or, later on, Jellycat. In stages where it is best not to waste time and push through Kid Tappa quickly, the use of Chill Cat is recommended to melt through his health. 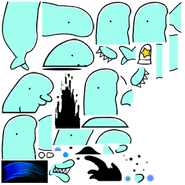