This article is about the Cat Unit. For the enemy, see Killer Cat (Enemy).

Killer Cat is a Rare Cat that can be unlocked when beating any stage in Day of the Cat or one of the first five stages in Horde of Cats. He was added in Version 5.8. True Form added in Version 11.5 greatly increases health and attack power, decreases cost, increases cooldown and grants Behemoth Slayer, Strong against Floating enemies and Surge Immunity.

Evolves into Radical Cat at level 30 using Catfruit and XP.

This is a joke character. He has the stats of a meatshield, but an insanely high cost (highest in the game!), which makes it, by far, the least cost-efficient cat you could ever use in a stage. Due to this, he is only good for User Rank, Cat Combos and grinding Meow Medals.

Using him with Lasvoss and Li'l Nyandam will activate one of the best Research Combos in the game: Bad Guys. This Combo decreases recharge times by 79f (2.63 seconds); it works very well with units such as Artist Cat and Cameraman Cat. Killer Cat's other Combo is Black & White, which is a Worker Cat Max Up (Sm) Combo that requires only him and the Basic Cat. This combo also has a synergy with Rich & Poor, and is especially useful in timed stages. This is especially helpful for the Ranking Dojo.

For obvious reasons, it is not recommended to use the Cat CPU with him in your lineup. One last perk about him is his usefulness in obtaining Meow Medals that require spending lots of money on units, such as Nouveau Riche.

*First stats are 1st form's initial, second and third stats include 300% Empire of Cats Treasures; recharge time may vary.
*Time between attacks is the time from the attack's execution to the start of the next attack (includes backswing).
*For units with multi-hit attacks, attack animation is the part of the animation leading up to the first hit.
*Fruit Treasures not included.
*See this section to calculate Killer Cat's stats.

Killer Cat appears as a playable skin, though he was renamed to Black Cat. 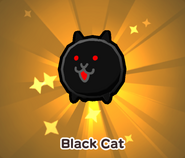