Korea is the first stage in every chapter of Empire of Cats. Upon completion in Chapter 1, Tank Cat will be available in the Upgrade Menu for the player to unlock.

Spam Cats. You really don't have a choice anyway...

There is no boss shockwave, so the level can be easily rushed with Giraffe Cat.

A brief tutorial guides the player through the basics of battle when attacking Korea for the first time. If the player loses the fight, they will be returned to the Main Menu screen. 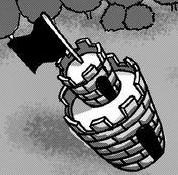