Kumanchu Royale (クマんちゅ ロワイアル Kumanchu Rowaiaru), also known by the unofficial name of Battle Bears, was a sequel to the original mobile phone version of Nyanko Daisensou. Developed by PONOS and only available on older generations of mobile phones, the game was discontinued on January 6th, 2015.

Kumanchu Royale was a tower defense game about a variety of bears advancing through the world and defeating enemies. Just like Nyanko Daisensou, the game played exactly the same as its prequel.

Some enemies from Nyanko Daisensou reappeared in this game alongside new, never-before-seen enemies.

There were 9 different bears in Kumanchu Royale, each based on a different Normal Cat. The only special ability in the game was "Strong against Red Enemies".

There were 21 Enemy Units in Kumanchu Royale, though only 12 have been identified. Like in the original mobile phone version, there were only 2 enemy types: Traitless and Red. Some of these enemies were brought straight from The Battle Cats, while others were exclusive to this game; two such enemies, Angelic Sleipnir and Mr. Mer, were reimported to The Battle Cats at a later date.

In the comments section of this video, there is a conversation between two people who seem to have played Kumanchu Royale. One helped to jog the other's memory of the enemies' names, including Mr. Mer's; this was before he was added to The Battle Cats. The rest of the comment thread sheds some more light on the enemy lineup:

Since they got Mr. Mer's name right, it's more likely than not that they were telling the truth, but the lack of footage means it can never be completely confirmed. 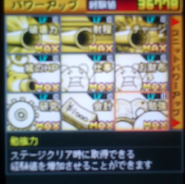 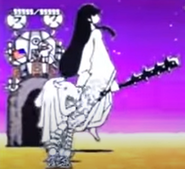 Mr. Mer, Those Guys and the final boss on the Moon