Kuu is an Uber Rare Cat that can be unlocked by playing the Rare Cat Capsule during the Cyber Academy Galaxy Gals and Red Busters events. She was added to the game with Kai and Coppermine on May 14th, 2014. True Form Increases health, attack power, range, attack rate and grants Weaken immunity.

Evolves into Divine Kuu at level 30 using Catfruit and XP.

Kuu has great general stats for an Uber, and even more towards Red and Black enemies. She has great survivability and can dish out enormous damage every time she attacks. Although it may sound like her long attack rate doesn't matter that much as long as you meatshield, it can actually be a massive disadvantage for a lot of situations. She's not reliable enough to clear advancing peons and, if she misses, whether it's because the boss got knocked back right before she attacks or because she targets the frontline peons, you will have to wait about 18-16 seconds before her next attack, in which she won't be guaranteed to hit, either.

That is not to say that she's a bad general attacker, rather that she has the tendency to miss a lot and not do much.

Black enemies, with their many knockbacks, are rarely a good matchup, although Kuu still does a great job against the few exceptions, such as Chocolate Wall Doge or Dark Otter.

Divine Kuu gains more health, more attack, a quicker attack rate, and more range in True Form. Unfortunately, they are not improved significantly enough to realistically change her effect in battle, so the best thing that can be gained out of her True Form is her higher range. Notably, her health is increased almost twofold, but that does not matter widely otherwise.

Unlocking her weaken, then leaving it at level one could be argued to be worth the cost, but it would be absurd to invest in such a short lasting ability for a unit who attack every 16 seconds. Attack Buff and Defense Buff are what you should focus on instead, as they directly improve this unit's performance on the battlefield. Wave Resistance and Curse Immunity are, on the other hand, too situational to be recommendable.

*First stats are 1st form's initial, second and third stats include 300% Empire of Cats Treasures; recharge time may vary.
*Time between attacks is the time from the attack's execution to the start of the next attack (includes backswing).
*For units with multi-hit attacks, attack animation is the part of the animation leading up to the first hit.
*Fruit Treasures not included.
*See this section to calculate Kuu's stats. 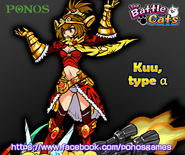