This article is about the Cat Unit. For the enemy unit, see Li'l Dark Cat (Enemy)

Li'l Axe Cat is a Special Cat that can be unlocked by playing the Event Capsule. True Form added in Version 5.10 increases health, range and attack power, as well as changing its targeted trait to Angel.

Evolves into Li'l Dark Cat when obtained from Li'l Axe Awakens! and is level 20 or above.

Due to being the Li'l version of a Normal Cat, Li'l Axe Cat suffers from a severe lack of good basic stats, which makes him underperform greatly in his field. For this reason, usage of Li'l Axe Cat prior to unlocking his True Form is not recommended. However, including him in Row 1 with Power Cutter Cat will create one of the most efficient Cat Combos in the game: Brave Cutter. An Attack Up (Sm) for just two units is extremely helpful. Combined with Sister Act, you can achieve a greater bonus than Cool Japan while using the same number of slots!

Li'l Dark Cat greatly improves his stats and becomes anti-Angel, but this doesn't help much. He has mediocre health at any level and is outranged by all Angels except Gabriel, Divine Cyclone and St. Dober. Use Rocker Cat instead if you have him (which you most definitely will if you were able to beat Tiny Chopper); he has better stats than Li'l Dark even against non-Angels, outclassing a maxed Li'l Dark once evolved into Ramen Cat. Li'l Dark Cat is still stronger than his prior forms even against Red enemies, so, if there is no other option but to use him due to circumstances (restrictions, somehow not owning anything better, etc.), there is never a reason to revert his form.

Li'l Dark Cat's Target Aku Talent combined with its Freeze Talent can make it a viable option in stages featuring Aku enemies. However, the Aku Altar present in many such stages places a major handicap on Li'l Dark's stats, and its old weaknesses are still prominent, specifically its low range making it only viable in a small handful of situations.

*First stats are 1st form's initial, second and third stats include 300% Empire of Cats Treasures; recharge time may vary.
*Time between attacks is the time from the attack's execution to the start of the next attack (includes backswing).
*For units with multi-hit attacks, attack animation is the part of the animation leading up to the first hit.
*Fruit Treasures not included.
*See this section to calculate Li'l Axe Cat's stats. 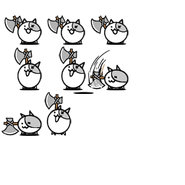 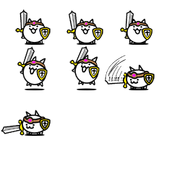