This article is about the Cat Unit. For the enemy, see Li'l Flying Cat (Enemy).

Li'l Bird Cat is a Special Cat that can be unlocked by playing the Event Capsule. True Form added in Version 5.10 increases health, attack power and range and gains the Strong Against Zombies and Zombie Killer abilities.

Evolves into Li'l Flying Cat when obtained from Li'l Bird Awakens! and is level 20 or above.

Due to being the Li'l version of a Normal Cat, Li'l Bird Cat suffers from a severe lack of good basic stats, which makes it underperform greatly in its field. For this reason, usage of Li'l Bird Cat prior to unlocking its True Form is not recommended.

Although its health and range still leave it highly vulnerable, Li'l Flying Cat's anti-Zombie perks allow it to take a specialized role as one of the few spammable anti-Zombie damage-dealers. Li'l Flying Cat annihilates most Zombie peons, even Zories, although it can't handle Zir Zeal, Zang Roo and a few others due to lack of range. Despite this, it serves as a great Zombie Killer, just make sure you aren't overwhelmed when those dangerous enemies burrow under your front line.

To improve its performance, but also due to the lack of accessible alternatives for dealing with Zombies in 4♛ stages, it is recommended to upgrade Li'l Flying Cat whenever possible.

Target Relic and Curse Immune give Li'l Flying rather decent stats against Relics, especially in 4♛ stages or no-gacha strats. While he does outrange very few Relics, he really works well against those few. He can notably shine against a swarm of Sir Rel or even Primeval Cyclone with proper team support.

Curse, however, is not really useful. It can prevent Relics from themselves cursing your Cats, as situational as that can be, as well as potentially helping against a few Zombies. However, most Zombies are stat-based and thus not hindered by Curse for the most part. Overall, this talent is too situational to be worth the NP, though the other talents are all great.

*First stats are 1st form's initial, second and third stats include 300% Empire of Cats Treasures; recharge time may vary.
*Time between attacks is the time from the attack's execution to the start of the next attack (includes backswing).
*For units with multi-hit attacks, attack animation is the part of the animation leading up to the first hit.
*Fruit Treasures not included.
*See this section to calculate Li'l Bird Cat's stats. 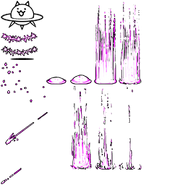