SoL: Sub-chapter 32 - Trouble at the Mansion

Teacher Bun Bun's son has fast movement and attack, fairly high health and attack power, and, perhaps most importantly, drops a minuscule amount of cash when dying. However, he still has many knockbacks and short range. He is known for being sent out in hordes and/or spawned infinitely like a peon, though his stats are definitely not like those of true peons. With their high movement speed and rapid attacks, Li'l Bun Buns quickly meet up with each other to form a stack, doing insane DPS to whatever they touch.

Treat him like a pure Floating Shy Boy, but devise a cost-efficient way to get rid of him. He can be beaten easily by anti-Floating units that do high damage like Cataur, or high area damage cats, such as Paris Cat or Cameraman Cat. 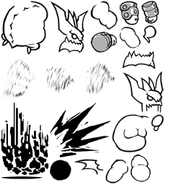