This article is about the Cat Unit. For the Enemy Unit, see Li'l Mohawk Cat (Enemy)

Li'l Cat is a Special Cat that can be unlocked by playing the Event Capsule. True Form increases health, attack power and recharge time and reduces deploy cost.

Evolves into Li'l Mohawk Cat when obtained from Li'l Cat Awakens! and is level 20 or above.

Although he has overall worse stats than Cat, Li'l Cat serves as a meatshield in 4-Crown stages or other such Restriction Stages that allow Special Cats. His low stats for even a meatshield and slow speed, however, make it one of the worst options, so it is not recommended in lieu of alternatives.

Li'l Mohawk Cat trades part of the spammability, which is a staple in most meatshields, for decreased cost, turning him into the cheapest in the game by a good margin. He can still be used as a meatshield, not differently than any other similar cat, but he becomes a little less effective in exchange for cost, making it a good trade only in money-tight stages.

Reverting his form back to Li'l Cat or Li'l Macho Cat is usually recommended, but, if a "Research" Effect UP Combo is used, the True Form becomes a direct upgrade instead. He does have one Combo with Jurassic Cat Sitter: Mini-Saurus, which does improve both his and Jurassic Cat Sitter's cooldowns, and is perhaps one of the best Research Combos that doesn't require Uber Rares.

*First stats are 1st form's initial, second and third stats include 300% Empire of Cats Treasures; recharge time may vary.
*Time between attacks is the time from the attack's execution to the start of the next attack (includes backswing).
*For units with multi-hit attacks, attack animation is the part of the animation leading up to the first hit.
*Fruit Treasures not included.
*See this section to calculate Li'l Cat's stats.

A cluster of Li'l Cats appear as a playable skin in Battle Cats Quest. 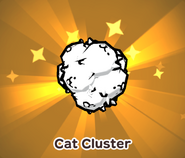