This article is about the Cat Unit. For the enemy, see Li'l Island Cat (Enemy).

Li'l Fish Cat is a Special Cat that can be unlocked by playing the Event Capsule. True Form added in version 5.10 grants increased health, attack power and recharge time and a chance to perform Critical Hits.

Evolves into Li'l Island Cat when obtained from Li'l Fish Awakens! and is level 20 or above.

Due to being the Li'l version of a Normal Cat, this unit suffers from a severe lack of good basic stats, making him underperform greatly in his field. For this reason, usage of Li'l Fish Cat prior to unlocking his True Form is not recommended.

Just like other Li'l Cats, Li'l Island gains the stats to become a viable replacement for his Normal and Crazed/Manic counterparts in certain Restriction Stages. Besides that, there is little reason to use him as his stats are still inferior to the Normal and Manic Islands.

His increased Critical chance can be ignored, as it still isn't high enough to make him a reliable counter to Metal enemies.

Starting with the bad, Resist Curse is useless, as Li'l Island should not be used against Relic enemies under any circumstance. Thankfully, the rest of its talents are a lot more viable.

Li'l Island Cat becomes one of very few units with an anti-Aku niche with talents, allowing it to diverge itself from its stronger counterparts and function as a strong frontline attacker against Aku enemies. Its stat buffs further allow it to perform this, even allowing it to dish out more DPS than regular Island Cat at max level. As if this wasn't enough, however, it also gains access to a Wave Attack, increasing its potential damage even more and increasing its usage against large swarms of Aku enemies.

*First stats are 1st form's initial, second and third stats include 300% Empire of Cats Treasures; recharge time may vary.
*Time between attacks is the time from the attack's execution to the start of the next attack (includes backswing).
*For units with multi-hit attacks, attack animation is the part of the animation leading up to the first hit.
*Fruit Treasures not included.
*See this section to calculate Li'l Fish Cat's stats. 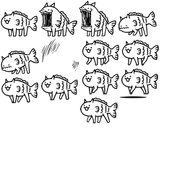