This article is about the Cat Unit. For the enemy, see Li'l King Dragon Cat (Enemy).

Li'l Lizard Cat is a Special Cat that can be unlocked by playing the Event Capsule. True Form added in Version 5.10 grants increased health, attack power, range and recharge time.

Evolves into Li'l King Dragon Cat when obtained from Li'l Lizard Awakens! and is level 20 or above.

Due to being the Li'l version of a Normal Cat, this unit suffers from a severe lack of good basic stats, which, combined with the increased difficulty in getting + levels, makes this unit underperform greatly in his field. For this reason, usage of this unit prior to unlocking their True Form is not recommended.

If the player's King Dragon is at a lower level, Li'l King Dragon will actually be the better choice out of the two, although King Dragon eventually outclasses him because of his higher overall level cap.

*First stats are 1st form's initial, second and third stats include 300% Empire of Cats Treasures; recharge time may vary.
*Time between attacks is the time from the attack's execution to the start of the next attack (includes backswing).
*For units with multi-hit attacks, attack animation is the part of the animation leading up to the first hit.
*Fruit Treasures not included.
*See this section to calculate Li'l Lizard Cat's stats. 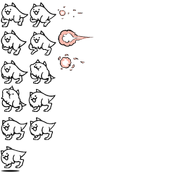 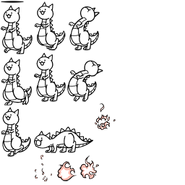