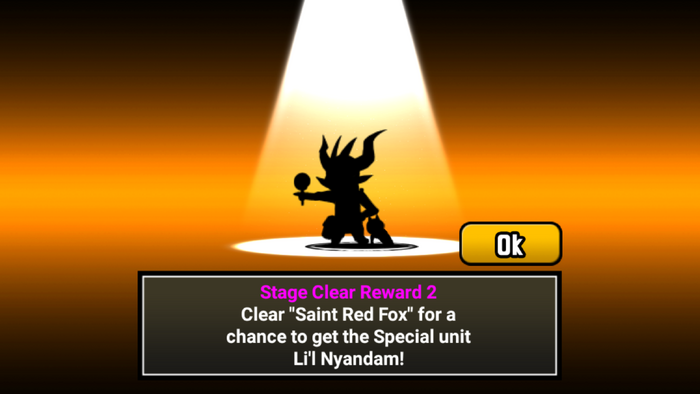 This article is about the Cat Unit. For the enemy, see Li'l Nyandam (Red).

Li'l Nyandam is a great long-range unit, useful mainly in 4-Crown Stories of Legend stages when fighting other long-ranged attackers. Since his range is higher than most backliner enemies like Elder Sloth, THE SLOTH, Master A., Professor A, and Dark Emperor Nyandam, he can be used to chip away at them and provide some support with his slow ability when the frontlines get into a stalemate.

Unfortunately, Li'l Nyandam is of little to no use against Camelle or his variants, as Nyandam's speed is far too quick, and his outranging them by one is not enough to make up for the length that he moves to. Additionally, great meatshielding is necessary against such enemies as they need to move just a little to be able to hit Li'l Nyandam.

Li'l Nyandam is outclassed by Cyberpunk Cat in most cases, as Cyberpunk doesn't rely on chance to slow enemies. With Talents, two Cyberpunks can even perma-slow enemies, which Li'l Nyandam is unable to do. That being said, Cyberpunk has minimal health and a giant blind spot; unlike Li'l Nyandam, who lacks a blind spot, can reposition once, and has significantly more health. Even so, his slow attack rate leaves much to be desired.

Schoolbus Nyandam's increased slow chance can easily grant great support to your cat army. That, combined with great range and better time between attacks, improves the effectiveness of his ability even more, as well as nearly doubling his DPS (which is still unimpressive, though it's not his main use anyway), making him a very useful support unit for 4-Crown stages or against Traitless and Relic enemies, as there are not many alternatives.

*First stats are 1st form's initial, second and third stats include 300% Empire of Cats Treasures; recharge time may vary.
*Time between attacks is the time from the attack's execution to the start of the next attack (includes backswing).
*For units with multi-hit attacks, attack animation is the part of the animation leading up to the first hit.
*Fruit Treasures not included.
*See this section to calculate Li'l Nyandam's stats.