For the enemy encountered in the Stories of Legend, see Li'l Nyandam (Red). 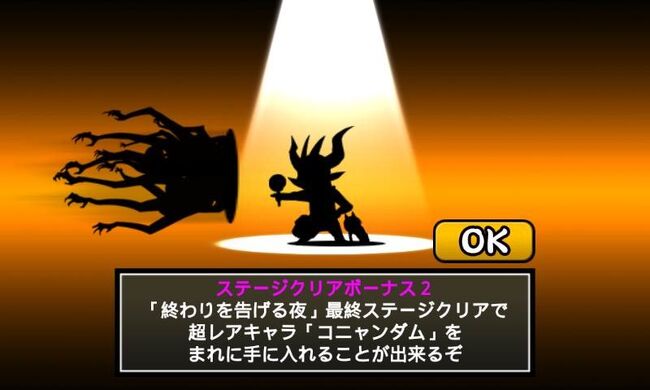 Li'l Nyandam is a Special Cat that can be unlocked when clearing Saint Red Fox, the final stage of Dead End Night. True Form added in version 7.0 increases health, attack power and slow chance, in addition to reduced time between attacks and immunity to Curse.

Li'l Nyandam is a great long-range cat useful in 4-star stages when fighting other long-ranged enemies. Li'l Nyandam proves their worth by occasionally outranging Camelle by 1, (although it isn’t likely, due to nyandam running into Camelle’s attack area) and having longer range than most enemies such as The Face and Master A. Great meatshielding is necessary against enemies with attack ranges that almost reach Li'l Nyandam as they need to move just a little to be able to hit this unit.

His true potential is revealed when he reaches his True Form, as the relatively high slow chance can easily grant great support to your cat army. This, combined with great range and better time between attacks improves the effectiveness of his ability even more, as well as improving the DPS (which is still not too good, though), making this cat a very useful support unit/attacker for 4 stars stages or against traitless/relic/metal, as there are not many alternatives (said alternatives are usually still better).

Schoolbus Nyandam's attack animation
Add a photo to this gallery

Retrieved from "https://battle-cats.fandom.com/wiki/Li%27l_Nyandam_(Special_Cat)?oldid=316645"
Community content is available under CC-BY-SA unless otherwise noted.