This article is about the Cat Unit. For the Enemy unit, see Li'l Eraser Cat (Enemy)

Li'l Tank Cat is a Special Cat that can be unlocked by playing the Event Capsule. True Form grants Freeze Immunity and increases health and attack power.

Evolves into Li'l Eraser Cat when obtained from Li'l Tank Awakens! and is level 20 or above.

Due to being the Li'l version of a Normal Cat, Li'l Tank Cat suffers from a severe lack of good basic stats, which makes it underperform greatly in his field. For this reason, usage of Li'l Tank Cat prior to unlocking its True Form is not recommended, with only a couple of exceptions.

Li'l Tank Cats unit's extremely short range can be used to cheese many stages where the boss spawns on base hit, notably Dark Souls and Marco Po Road, since most minor peon enemies have upwards of 110 range and above, with Li'l Tank Cat only having 100 range in all forms. In later stages, you will need to boost Li'l Tank Cat or get its True Form for more consistent results, like if you are attempting the same strategy on Deathhawk.

In absence of alternatives, Li'l Tank Cat can be used as a one-hit meatshield like Cat, but its double cost and slow speed make it far less ideal than any 75¢ meatshield so this is mostly reserved for 4-crown if you have nothing better to use.

Many of the same strategies used for Cat or Tank Cat work here, too. Just NEVER rely on this kitten too far, as Eraser Cat can take FAR more punishment and is just as easily mass-produced. Despite its lower stats, it really shines in 4-Crown stages, where it takes Eraser Cat's role. Although it has low health compared to Eraser, it can still take quite a few hits from decently buffed enemies. Its lower health can actually help for those who lack Curling Cat, since it won't advance far when being faced by the peons at the start of a battle. Its immunity to Freeze can also help a lot in stages that are complicated by Henry, such as Electric Bath.

As of Version 10.7, Li'l Tank notably has a 2-slot Cat Combo with Commando Cat that gives Unit Defense Up (Sm). As Commando Cat's True Form, Cameraman Cat, is already an incredible unit you're likely to be using anyway, putting Li'l Eraser on the team can be very helpful for the rest of the team with little to no downsides, save for some of your Eraser's tankiness.

*First stats are 1st form's initial, second and third stats include 300% Empire of Cats Treasures; recharge time may vary.
*Time between attacks is the time from the attack's execution to the start of the next attack (includes backswing).
*For units with multi-hit attacks, attack animation is the part of the animation leading up to the first hit.
*Fruit Treasures not included.
*See this section to calculate Li'l Tank Cat's stats. 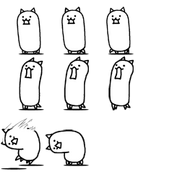