For other uses, see Valkyrie.

Li'l Valkyrie is an Uber Rare Cat that can be unlocked by playing the Rare Cat Capsule during a special variation of Best of the Best released for BCTW and BCEN's 3rd anniversary and BCJP's 6th anniversary, which contains her instead of Shadow Gao or during a special UBERFEST released early in the year.

This unit is mostly used as a generalist or as a quick, high DPS unit. She has added abilities that make her better against Zombies, wave attackers, status-inflicting enemies and Starred Aliens. She acts almost as though she were Awakened Bahamut but with with less DPS and speed, in exchange for more range and a faster recharge, which means she can be stacked in stages where she isn't outranged.

Her high damage and DPS, medium range and high speed make her a great suicide bomber to deal insane damage and then die, similar to Yukimura. However, she gets hit easily because of her movement speed. Lengthy foreswing (1.06 seconds) can also be a problem.

She is best on stages where she can get inside the enemies' blind spot, so she can take advantage of her Zombie Killer/high DPS/wave immunity.

She narrowly outranges The Face by 5 range. With proper meatshielding, she can take him out. However, when The Face is knocked back, she usually runs into him and get knocked back or be killed unfortunately.

Note that this unit has a hard time surviving for long, due to low health, range and knockbacks, but also because of her excessive speed and immunity to abilities that would let her reposition, being Knockback and Warp.

*First stats are 1st form's initial, second and third stats include 300% Empire of Cats Treasures; recharge time may vary.
*Time between attacks is the time from the attack's execution to the start of the next attack (includes backswing).
*For units with multi-hit attacks, attack animation is the part of the animation leading up to the first hit.
*Fruit Treasures not included.
*See this section to calculate Li'l Valkyrie's stats. 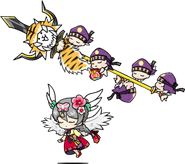 BCJP/BCTW version
Add a photo to this gallery

Retrieved from "https://battle-cats.fandom.com/wiki/Li%27l_Valkyrie_(Uber_Rare_Cat)?oldid=520311"
Community content is available under CC-BY-SA unless otherwise noted.