Lione Hippoe (獅子カバブー shishi kababū) is an event enemy that only appears in the Happy New Year? Event and 10 Million Downloads campaign of Battle Cats.

It is faster than the original Hippoe and has more health. It deals 999 damage per attack and attacks almost three times as fast as Hippoe.

*In each stage, there is strength magnification, the value of health and attack power varies due to this value. 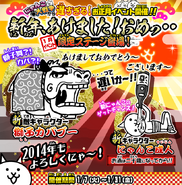