This article is about the enemy. For the Cat Unit, see Jagando Jr. (Special Cat).

Lord of Ruin Jagando (破壊神ジャガンドー Hakai-shin Jagandō, lit. "Destruction God Jagando") is an Aku enemy found in an invasion which appears in Mount Aku/Mount Fuji after clearing all stages in The Aku Realms. Once defeated, his Legend Cat counterpart Jagando Jr. will be unlocked.

At a glance, Lord of Ruin Jagando may not seem that dangerous, as he only has 300 range and the first two hits of his attack total to just 12,000 damage, with the third taking much longer to execute. These major weaknesses are completely offset by an Omni Strike that extends Jagando's reach to 450, removing any chance of him missing his third hit and allowing him to reach the majority of non-Uber Rare Cats, including Shield Piercers that could help cut down his effective health pool of 5,600,000. If that weren't enough, the third hit also carries a wildly inconsistent Surge Attack that has a 30% chance to spawn and could wipe out everything or nothing depending on when and where it appears; so don't expect to beat him on your first try. 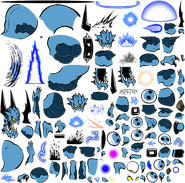