Lucifer the Fallen is a Uber Rare Cat that can be unlocked by playing the Rare Cat Capsule during the The Almighties The Majestic Zeus event. It was added in Version 11.1.

Evolves into Grand Lucifer at level 10.

+ Strong against Floating and Aku enemies
+ 50% chance to create a Lv.1 Surge Attack
+ Immune to Surge
+ Long Distance attacks
- Has a blindspot

Lucifer the Fallen is an effective backline attacker with both excellent range to keep him outside the reach of most enemies and high DPS for said range, which is helped by a surge and the strong ability against two traits. His slow-ish attacks and large blindspot, combined with mediocre health, make him particularly weak against rushdown enemies, such as Bore, but he works really well against most longer ranged enemies, such as Le'boin or Mooth. Since most armies tend to have a bit of both, it is always best to summon Lucifer the Fallen late in the fight, after a powerful frontline is established, so he may live long and attack safely.

Unlike most similar units, Lucifer the Fallen uses Surges to partly cover his blindspot, rather than to extend his reach, making him somewhat better in most situations, as the bulk of the enemies tends to be closer to the inner range than the furthest reach; in other words, the Surge acts as a balancing factor, improving on this unit's weakness instead of capitalising on his strength.

Of course, thanks to his ability, Lucifer the Fallen shines the most against Floating and Aku. All throughout the game, Floating is a common trait, often given to strong bosses or long ranged common enemies, which is highly beneficial to this unit; just beware of Brollows and Zollows! Although he lacks a way to deal with Shields, Lucifer the Fallen has a surge that is quite likely to hit whoever gets their shield destroyed by his main attack, mitigating the issue. Surge immunity and the high damage per hit, on the other hand, help immensly, making Lucifer the Fallen overall effective against this trait.

*First stats are 1st form's initial, second and third stats include 300% Empire of Cats Treasures; recharge time may vary.
*Attack frequency is the time between an attack is delivered and the next.
*For units with multi-hit attacks, attack animation is the part of the animation leading up to the first hit.
*Fruit Treasures not included.
*See this section to calculate Lucifer the Fallen's stats. 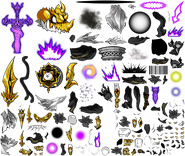