Cats in the Snow

A bigger, hairier variant of Le'boin based off a Woolly Mammoth. It can create level 3 Wave Attacks allowing it to reach much further. Like Le'boin, it has high health and damage output. Its waves combined with the Snowballs that usually spawn with it makes for a dangerous mix, and can clear the player's defense pretty quickly.

There are a select few cats that can outrange its Wave Attacks like Hacker Cat, but it'll take really long to kill Mammothe using only them. Mammothe's highest attack power in the whole event chapter is just around 3000 damage, so the player can just use Sexy Legs Cat and Dragon Cat to decrease its health little by little. However, they should be aware of other threats such as the Snowballs and strong peons. Units that ignore or block Waves or have very high health such as Cat Machine or Akira will make dealing with Mammothe much easier. 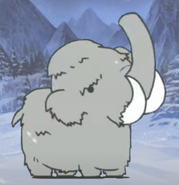