Meet your worst nightmare. This feral feline has extreme health and attack power, as well as faster movement speed than Crazed Cat along with a slightly faster attack rate. Even the short range plays in his favor, as he can burst past your frontline more easily when combined with his increased speed.

He may seem impossible to stall, but if your Crazed Wall Cat is level 30 and your Eraser Cat is at least level 20+23, then he won't push too much. Combine that with Thaumaturge Cat and add support from cats like Paris Cat and the battle won't be as hellish as it was. 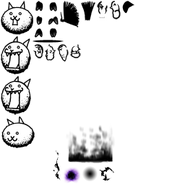