Martin is a yellow-ish koala who seems to be holding a cracker stick dipped in chocolate, similar to a Pepero, and attacks by smashing it down. Looks like an angry version of Kory. With his constant, hard-hitting Area Attacks, Martin can be treated as a Teacher Bun Bun with longer range and no trait.

This enemy may seem deadly with his range, but unlike his other variants, Martin CANNOT make Wave Attacks. This means meatshields are extremely useful against him. Dragon Cat outranges Martin, so stack them in huge numbers to take him down! You can also use fast, hard-hitting units such as Awakened Bahamut Cat to deal some quick damage and claim Timed Score Rewards. Paris Cat/Cyborg Cat outranges Martin, so you can spam them as well, due to their low recharge time. 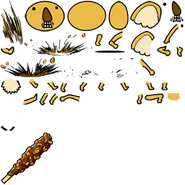