It has buffer arms and a beard, but don't let that frighten you. It has much more health than Dagshund, but slightly weaker attack power combined with a slower attack rate. It also has three knockbacks instead of Dagshund's one knockback. Due to its health, its usage in most of the stages it appears in is to act as a meatshield for more threatening enemies, such as The Red Malice or Hermit Peng. 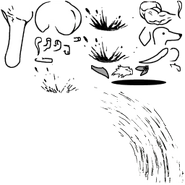