MattShea is one of the Youtubers that has a Let's Play series of Battle Cats, and is the Cats' favorite as they claim on PONOS' announcement. MattShea's collaboration/campaign with The Battle Cats started on March 13th, 2017.

All players will receive a new "limited edition" mysterious Cat that has "never before released outside Japan" as soon as this video reaches 400,000 views. 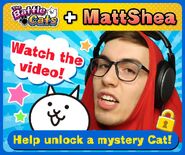 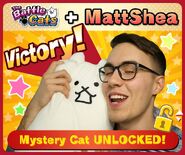