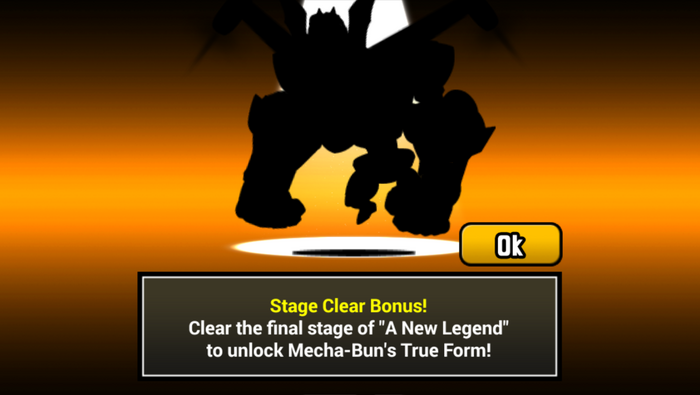 This is article is about the Cat Unit. For the enemy units, see Mecha-Bun (Floating) and Relic Bun-Bun (Relic).
Not to be confused with Bun Bun Monger Prototype.

Mecha-Bun is a Special Cat that is unlocked when beating Eldritch Forces. It was added in Version 7.0 along with its True Form, which increases its health and attack power, is strong against Relics and becomes immune to curse.

Evolves into Ultimate Mecha-Bun at level 30 using Catfruit after completing An Ancient Curse.

Mecha-Bun is supposed to be a speedy tank that can rush in and deliver its damage while tanking some hits before dying. Unfortunately, it has low overall stats, and thus is only useful if hypermaxed. Considering its low overall range and health, its safe to say in all late-game scenarios, Mecha-Bun will not last long enough in battle to contribute to anything that was worth the money you spent. It would just be better to use another cat if you want a Rusher; Awakened Bahamut Cat being the most ideal.

In the best of all cases, Mecha-Bun is okay at rushing in and beating early 4-Crown Stories of Legend sub-chapters, or at least being a source of DPS. However, this assumes you do not have any better sources of DPS to work with, and you most certainly will, as the spammability of cats like Cyborg Cat and Cameraman Cat purely outclass him. Since 4-Crown stages limit the use of most Rusher-class Cats, you can use Mecha-Bun as a secondary rusher, as it is the only other one aside from Awakened Bahamut Cat, Capsule Cat and a few others that aren't worth mentioning.

Ultimate Mecha-Bun gains the Strong Against ability vs. Relics, higher health and attack power, and a slightly longer attack rate. Unfortunately, aside from usage against Relics, none of this increases its base stats enough to matter, so you should not unlock it unless you are especially struggling against Relics- specifically Dogumaru, Lowkey, or potentially Oldhorn, as it can rush in and deal decent burst damage before imminent death, synergizing with its cooldown. Other anti-Relic units like Awakened Mina, Slapstick Cats, and even Awakened Ururun make a better use of Elder Catfruit, meaning that unlocking Ultimate Mecha-Bun should not be a priority until Primitive Souls is reached and has to be done in multiple difficulties; provided no other Rusher or Tanker Ubers are owned.

*First stats are 1st form's initial, second and third stats include 300% Empire of Cats Treasures; recharge time may vary.
*Time between attacks is the time from the attack's execution to the start of the next attack (includes backswing).
*For units with multi-hit attacks, attack animation is the part of the animation leading up to the first hit.
*Fruit Treasures not included.
*See this section to calculate Mecha-Bun's stats.