Medusa Cat is a Rare Cat that can be unlocked when beating the Advent Stage Courts of Torment appearing on the 11th, 12th, 25th and 26th of every month. True Form added in Version 11.2 improves HP, Freeze chance, and Freeze duration.

Evolves into Naga Cat when obtained from Okame's Teahouse (Merciless) and is level 20 or above.

Medusa Cat is a unit with a rare niche: freezing Relic enemies. While at first glance this seems to be a great unit, her low freeze chance and mediocre uptime force you to stack Medusas to use her full potential. While risky, this can be very rewarding. Medusa could potentially be compared to Titi Cat CC with the way that her debuffing works. With this being said, her drawbacks increase when you compare her to Talented Rodeo Cat or Slapstick Cats; but since she completely freezes the movement of Relics, she can be a great help when she works. Beware her inner range, however; any frontline Relics will easily invade that without help from Modern Cat or other supporters.

The Relics she works best against are Oldhorn, Relic Doge, and Sir Rel. Most other Relics are a poor matchup for her since they outrange, excluding Idi:Re, Primeval Cyclone, and Relic Bun-Bun, provided you have a setup taking advantage and properly protecting her. Medusa only stands outside Relic Bun-Bun's Omni Strike by 50, so be wary when using her against it. Notably, she can also potentially work alongside Master Uril and Elder Mask Doron as support, especially in 4-crown Uncanny Legends.

Naga Cat improves her HP, Freeze chances, and Freeze duration. The extra HP might not be that much, but it does somewhat help with stacking. On that note, the improved odds and duration of her Freeze ability only really become useful with a stack of Naga Cat, allowing her to more consistently get a Freeze off and keep it on long enough for the next Freeze to proc. She simply becomes better at what she was already decent at doing, which can still be helpful in 4-crown stages or non-gacha strats.

*First stats are 1st form's initial, second and third stats include 300% Empire of Cats Treasures; recharge time may vary.
*Time between attacks is the time from the attack's execution to the start of the next attack (includes backswing).
*For units with multi-hit attacks, attack animation is the part of the animation leading up to the first hit.
*Fruit Treasures not included.
*See this section to calculate Medusa Cat's stats. 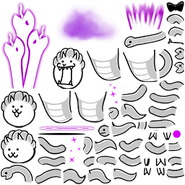