Megidora is an Uber Rare Cat that can be unlocked by playing the Rare Cat Capsule during the Lords of Destruction Dragon Emperors and Air Busters events. True Form added in Version 5.0 improves health, attack power, speed and range.

Evolves into God-Emperor Megidora at level 30 using Catfruit and XP.

+ Can knockback and slow Floating enemies

Megidora is a very good unit against Floating enemies: Decent range, attack rate and can knockback and slow them. He is also a moderate generalist thanks to his stats. However, you should remember to protect him properly, since he has a tendency to recklessly rush into frontlines due to high movement speed.

Megidora is also very useful against enemies like Teacher Bun Bun and its counterparts, as he can prevent them from advancing forward and killing your precious units.

However, using him on Floating enemies may create an effect called "Mizli syndrome", where knocking back frontline enemies will cause your Cats to walk into the range of backline enemies, harming them instead of helping them.

God-Emperor Megidora gains higher health, attack power, attack range and movement speed. Though these boosts make him a better generalist, the movement speed increase means that Megidora will sometimes rush into enemy frontlines and die quicker. To make matters worse, he did not receive more knockback count in tandem with his higher health, meaning that boost in particular may be pointless. The extra range is largely irrelevant, as it doesn't allow him to outrange any more Floating enemies than before.

Megidora gains increased knockback chance, wave attack, and Curse Immunity through Talents, along with standard stat increases. Among all these, Wave Attack, Curse Immune and Attack Buff are the most important: Curse Immunity make him useable in Uncanny Legends, although anti-Floating crowd-control is a largely irrelevant role due to Sanzo Cat and Necro-Dancer Cat; Wave Attack allows Megidora's damage and crowd-control to reach backline enemies, but note that the wave DPS is quite low, but note that Necro-Dancer Cat also has a Wave Attack talent which outclasses one in terms of crowd-control. Attack Buff makes Megidora deal more damage in the battlefield, lessening his competition for a generalist. Unfortunately, by the time you manage to scrape together enough NP to unlock and max this Talent, you most likely have Awakened Ururun who outclasses Megidora as a generalist.

*First stats are 1st form's initial, second and third stats include 300% Empire of Cats Treasures; recharge time may vary.
*Time between attacks is the time from the attack's execution to the start of the next attack (includes backswing).
*For units with multi-hit attacks, attack animation is the part of the animation leading up to the first hit.
*Fruit Treasures not included.
*See this section to calculate Megidora's stats. 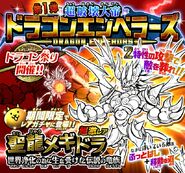 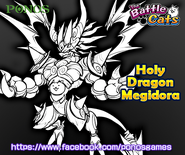