Metal Cat is a Super Rare Cat that can be unlocked by playing the Rare Cat Capsule when "Limited Edition" is part of the current pool.

Evolves into Metal Macho at level 10.

+ Only takes 1 damage per attack, except for Critical Hits and Toxic attacks.

Expensive and not worth the cost at first sight, this cat is exceptional if used properly. Metal Cat can take a maximum of 12 hits when it is level 20, but will only get knocked back 2 times, meaning that he can stop the progress of a single enemy, regardless of its attack power, by standing in front of it for two times 6 hits. Hence, he is very useful against powerful enemies with slow attacks, such as Dark Emperor Nyandam, and THE SLOTH, or deny a huge amount of hits from enemies like Teacher Cybear.

However, what makes Metal Cat a good unit is also his downfall; as said before, Metal Cat will die after 12 hits, no matter what. When there are a lot of peons, or an enemy with a quick attack rate such as R.Ost, rather than wasting 600¢, use your usual tough meatshields such as Eraser Cat and Crazed Wall Cat, or to make this problem minimal, clear its way with wave attackers like Manic Macho Legs.

*First stats are 1st form's initial, second and third stats include 300% Empire of Cats Treasures; recharge time may vary.
*Attack frequency is the time between an attack is delivered and the next.
*For units with multi-hit attacks, attack animation is the part of the animation leading up to the first hit.
*Fruit Treasures not included.
*See this section to calculate Metal Cat's stats.

Metal Cat appears as a playable skin, though he was renamed to Silver Cat. 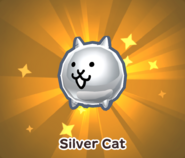 A special pool including Metal Cat