Similarly to other Cyclones, this enemy attacks non-stop and deals a lot of damage, but has a very short, easy to exploit range. It takes only 1 damage from non-Critical attacks like all Metal enemies yet has more than triple the health of Sir Metal Seal, requiring a lot of Critical Hits to defeat. It is the slowest Cyclone, but its debut stage's length is much shorter to compensate.

Catasaurus is extremely helpful against this mechanical monstrosity, especially if Talented, due to its frequent Critical Hits and the fact you don't have to worry if one dies due to their spammability. It can even work before his True Form as a matter of fact, except that before it it offers less consistency and worse range.

Even with its ridiculous DPS and health (for a Metal enemy), Metal Cyclone suffers from being one of the slowest enemies in the game, with a pitiful 2 movement speed, and is hindered even further by being the enemy with the 4th-shortest range in the game, which means even the most pathetic of Critters can work against Metal Cyclone if luck is on your side. 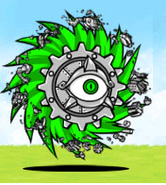 Metal Cyclone before it was implemented

Metal Cyclone on the Storm of Steel Meow Medal